It was perhaps serendipity that brought Bob Wilson to Dundas United Soccer Club.

The former president of the club inducted into Hamilton’s Soccer Hall of Fame last weekend for two decades of amateur men’s soccer dominance in Hamilton recently reminisced about the day he got lost on Highway 99 and ended up in the Valley Town in 1977.

“Watch your mouth,” a woman said when he asked if this was Hamilton.

As the nomination deadline for Dundas Sports Wall of Fame’s third class of inductees approaches, planning and fundraising is underway for the new Hockeyville Legacy Community Room of the renovated J.L. Grightmire Arena — where it will have a permanent home.

“I would say they’re light,” Samson said of the pool of nominations submitted for the class of 2020 since July, but the committee does not plan to extend the deadline. 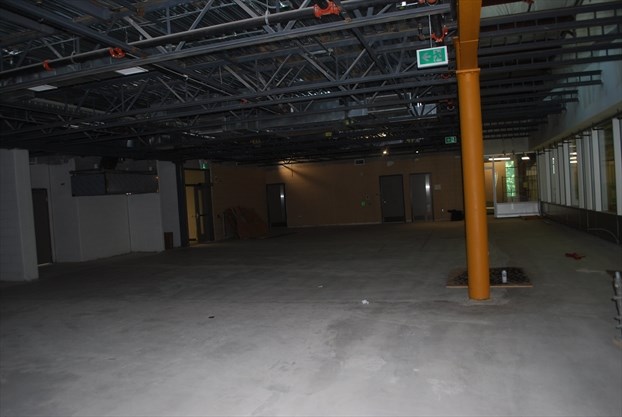 Art Samson, outside the new Dundas Valley Secondary School named in his honour

It’s probably not a surprise that Art Samson, partway through his speech at the official naming of Dundas Valley Secondary School’s new track and field in his honour, handed the microphone to someone else.

Samson has been putting others before himself for more than 50 years, and it’s the wider-community that benefits. His decades of work in local education and youth sports made Art Samson Track & Field the runaway choice for the new facility’s name.

As a former football coach, I know we have to start them on time — so I’m not going to take too much time, Samson said.

Dundas Blues president Steve Aglor outside J.L. Grightmire Arena eight months ago, as ongoing delays forced user groups out for a second season. The team is now preparing for its 60th season, back in its upgraded home rink. - Craig Campbell/Metroland

After two years of instability, the Dundas Blues Junior Hockey Club will renew itself with a return to its original name and its upgraded home in J.L. Grightmire Arena, in time for the club’s 60th anniversary.

To top it off this season, Blues president and past player Steve Aglor will officially be inducted into the Dundas Sports Wall of Fame - which will finally make its permanent home in the new second storey of Grightmire Arena’s addition.

The Blues maintain a two-year-old partnership with the Hamilton Huskies. Mike Spadafora, general manager of both organizations, asked Aglor what he thought about changing the team’s name back to Dundas Blues from Hamilton Huskies Junior Blues - after one season.

“I’ve had a big smile on my face ever since,” Aglor said.

Spadafora said the highly anticipated return to J.L. Grightmire Arena this September after two difficult seasons away, and the 60th anniversary, were key reasons for a step back on last season’s name change. The City of Hamilton has taken over part of the arena from the contractor and just a couple of projects remainto be completed.

“Feedback I’ve received convinced me the team should be called the Dundas Blues,” he said. “The partnership won’t change.”

Aglor said the only reason the six-decade old club is able to return to the refurbished and improved arena on Market Street is that very partnership which started two seasons ago.

Aglor and Spadafora agreed the completed facility will be the best hockey arena in Hamilton, and across its entire junior league.

“Everything will be top notch,” Aglor said.

City of Hamilton public works staff say the municipality took over part of J.L. Grightmire Arena from contractor Century Group at the end of April and removed most of the construction fence surrounding the Market Street construction site as the project finally achieved partial occupancy.

City spokesperson Jacqueline Durlov said the city and contractor are now working together to complete the long-delayed addition and renovation project. Completion is now nine months past the original Sept. 7, 2018, deadline.

“The contractor’s work will be complete on site by end of June, at which time the city will completely take over the site to finish up some minor works leading up to ice-making and fall 2019 hockey,” Durlov said.

Among the work still required is installation of a new flood-proof Zamboni door required by Hamilton Conservation Authority and new concrete stairs and wheelchair ramp in the area between the arena and Garstin Centre for the Arts building.

“The contractor’s work will be complete on site by end of June." — Jacqueline Durlov

Durlov said the new flood-proof barriers arrived on-site several weeks ago and both key remaining jobs are scheduled to be completed by the end of June, but apparently aren’t required for occupancy and won’t delay reopening the arena.

Flood proofing the arena’s Zamboni entrance, either by raising the entire structure at considerable cost or finding a waterproof door, was a major early stumbling block to the original expansion and renovation application more than five years ago.

Peter Lloyd of Dundas Little Theatre said the organization has not heard when the new concrete steps and wheelchair ramp will be completed.

The group lost access to its main public entrance for the entire past seasonand part of the previous season.

“I seem to remember that the ramp has to be finished before we can open the (main) doors again,” Lloyd said.

The project tender stated that concrete stair and ramp work was to be completed by July 31, 2018.

Awesome photo posted on the "If You Grew Up In Dundas" page on Facebook.

Kerry McNamara, a member of the Dundas Museum & Archives board of directors, displays an historic baseball bat that is part of the museum's collection during the Dundas Valley Historical Society's presentation Sports: A lasting legacy,Oct 2017. - Craig Campbell

Sports have left — and continue to build — a lasting legacy in Dundas, even for those who don't directly participate.

From the Dundas Real McCoys, who brought the eyes of the nation to the Valley Town when the Sr. A hockey team won the Allan Cup national championship in their home arena and also donate to charity on every game night, and the powerhouse Dundas United Soccer Club of the 1980s — who paid their own way to a national championship final in Victoria while celebrating the camaraderie and skill of the game, to the Dundas Chiefs Baseball Club and little league baseball — who helped build new baseball infrastructure that would introduce future generations to the game, Dundas' history is filled with fascinating sports stories.

A small cross-section of those legacies were shared by some who have played a role in that long legacy last Thursday evening at Dundas Valley Historical Society's Sports: A Lasting Legacy presentation at Dundas Museum and Archives.

The Dundas Dynamo Girls U10 team won gold in Division 2 at the recent Ontario Cup Championships in Guelph. They beat Canada Elite 34 - 30 in the final.

Pictured from left to right are: